The Civil War discharge records reveal a treasure of personal information about age, birthplace, appearance, and conduct of the soldier. Samuel L. Roberts was discharged twice, first in 1964 in Vicksburg, Mississippi to reenlist into the 15th Iowa Infantry Veteran Regiment, and then fully discharged in July 1865.

Born in Ohio, but living in Indianola, Iowa in 1861, Roberts was only 18 when he enlisted. The 15th Iowa Volunteer Infantry Regiment where he served was mustered in 1862, and was engaged in the Battle of Shiloh, and the Second Battle of Corinth, where the Confederate army captured Roberts and later exchanged him in Vicksburg, Mississippi. Despite the pledge upon parole "not to take arms again" he probably never quit the service and in 1864 participated in the Atlanta Campaign with the 15th Iowa. The document now belongs to Roberts' granddaughters Grace Emmett and Mary Ann Hessenflow.

Paid in full 30 aug 1865
[signed]
Paymaster (?)
To All Whom it May Concern
Know ye, That Samuel L Roberts a Sergeant of Captain Edward P. Bye
Company, (G,) 15th Regiment of Iowa Infantry Vet
VOLUNTEERS who was [-enrolled-](crossed) reenlisted on the first day of February
one thousand eight hundred and Sixty four to serve three years or
during the war, is hereby Discharged from the service of the United States,
this twenty fourth day of July, 1865, at Louisville
Kentucky by reason of G O No 2421 d Grs. Army of Tenn, Series 1865
Gen orders no. 191t(?) 305 Series of 1863 War Department
(No objection to his being reenlisted is known to exist.*)
Said Samuel L. Roberts was born in Clark County
in the State of Ohio, is twenty years of age,
five feet eight inches high, dark complexion, dark eyes,
dark hair, and by occupation when enrolled, a Farmer
Given at Louisville, Ky this Twenty fourth day of
July 1865.
[signed]
E.P. Bye Capt Co G
15th Regt Iowa (?) vol Inft 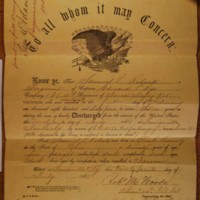