Printed funeral cards like this one were distributed among family and friends to invite them to the ceremony and last rites. These cards are a valuable source for dates in a family history.

Joseph Littlefield lived a long and eventful life. Born in Peoria County, Illinois in 1840, Littlefield served almost three years in the Civil War as a private in company C of 102nd Illinois volunteer regiment. After the war he returned to Illinois and married Hellen Crandle. In 1879 Joseph Littlefield and his family that included his mother Joanna, who was 71 at the time, came to Nebraska Clear Creek area, Sherman County to homestead. Hellen died in 1881 and six years later Joseph, now 47, married 24 year-old Lotta (Charlotte) Roberts, and had 7 more children with her, of whom only 5 survived. Littlefield moved to Aurora, Nebraska in 1904 and died there in 1911.

This card comes from the collection of Terri and Dave Mabon. Dave Mabon is Joseph Littlefield's great-grandson. 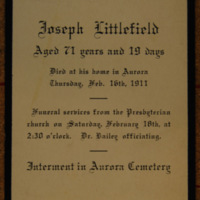