The photograph shows a part of Joseph Littlefield's family (his second wife Charlotte, his children from two marriages, his sisters) near the Littlefields' home in Aurora, Nebraska where Joseph moved in 1904. 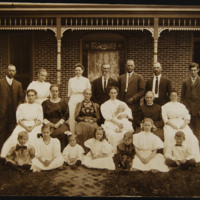