Joseph Littlefield filled out this Oath of Identity blank form probably in preparation to certify his Civil War record documents with the notary while applying for a pension. When filled the document would testify that the person appearing before the notary is the same person whose war record would be provided.

The form comes from the collection of Terri and Dave Mabon. Dave Mabon is Joseph Littlefield's great-grandson.

Sworn and subscribed before me the day and year above written.


I certify that ___________________before
whom the above affidavit purports to have been made, is a Justice
of the Peace duly authorized to administer oaths, and that the
above is his signature. 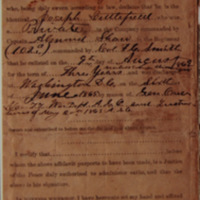