This is a Timber Claim granting Patrick Kennedy, Sue Eickhoff's great-grandfather, rights over 160 acres of land in accordance with the Timber Culture Acts of 1873, 1874, and 1878. First passed in 1873, the Timber Culture Act provided up to 160 acres of land to farmers for planting trees to better the land for cultivation and increase the rainfall in the western parts of the Great Plains. Most often, however, the Timber Claim allowed homesteaders to secure another section of land, leading to the repeal of the act in 1891. Yet the claims established for over ten years after 1891 as Patrick Kennedy's claim testifies. Since Patrick Kennedy became a citizen in 1884, and secured his homestead claim in 1891, it is probable that he established the claim in the early 1890s, as only citizens and homesteaders could establish Timber Claims after 1874. 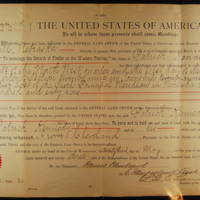