Charlie Eickhoff's father Frank Eickhoff was a son of Elizabeth Eickhoff (nee Bruns) and Edward Eickhoff from the small town of Crofton in Knox County, Nebraska. Born in 1895, Frank Eickhoff served in the cavalry in World War I. In 1928 Frank married Martha Waltz. Born in 1904, Martha was a child of German immigrants. Frank continued to live in Nebraska until his death in 1984. Martha survived him by four years and died in 1988. The photograph was probably taken on September 11, 1928, the day of Frank and Martha's wedding. 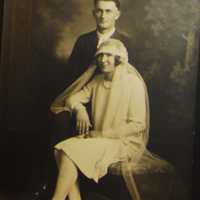