History of the Schuetz Family

History of the Schuetz Family

This is the Schuetz family history starting from Gottlieb Schuetz and Anna Parli who came from Canton Berne, Switzerland to Humboldt, Nebraska in 1870. The family history dates back to the early 20th century, as it is typed on the stationery of the bank established in 1915 and probably compiled by Mary and/or Arnold Schuetz. Gottlieb Schuetz and Anna Parli were the second maternal great-grandparents of Bill Dean and his family who shared the documents at the History Harvest. It is possible that the list of children is not complete, as the obituaries list Gottlieb Schuets having ten children of whom only five survived him. Maria (Mary) Schuetz, born in 1867 in Switzerland was the only daughter to survive Gottlieb Schuetz, and she started the Dean family line marrying German-born Dirk Sutorius in 1889. Their daughter Emma, born in 1890 married a recent emigrant from Germany (1908) Edo F. Harms in 1914. All three generations lived in Humboldt in close proximity with various relatives (Emma Sutorius's uncle John Schuetz lived right next door to her family according to the 1930 census).

First settled in 1855, Humboldt, Nebraska is very close to Nebraska's borders with three states: Missouri, Iowa, and Kansas. The town was a home to a vibrant immigrant community uniting people from Germany, Switzerland, Bohemia, and later Czechoslovakia, England, and various other places in the United States and beyond. The German-speaking community organized around the German Methodist mission that established a church in Humboldt in 1879, of which Gottlieb Schuetz was a member and maybe even a pastor. 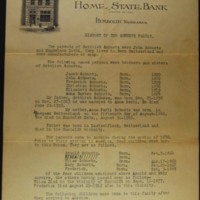