This is a baptismal certificate for Friedrich Schuetz, the fourth child of Bill Dean's second great-grandfather Gottlieb Schuetz. A son of soap manufacturers Hans (John) Schuetz and Magdalena Luthi, Gottlieb was born in 1838 in Canton Berne, Switzerland. He married Anna Parli who also came from Canton Berne, Switzerland in 1863 and immigrated to Humboldt, Nebraska in 1870. Friedrich was their last child, born in Switzerland on October 3, 1868. He never married and died in the house of his brother Arnold, the eldest in the family on August 29th, 1912.

Baptismal certificates in the mid-19th century most probably served as a birth certificate, identifying parents (Eltern), witnesses of baptism (Zeugen) and date and place of birth down to the district (Amtsbezirk) and parish (Kirchgemeinde). 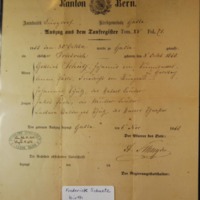