This document comes from the family of Bill Dean, Margaret Dean's husband, who are the second great-grandchildren of Gottlieb and Anna Schuetz. It is a baptismal or confirmation notice for Gottlieb Schuetz written out as keepsake of the baptismal or confirmation day. Baptismal notices (Tauzettel, Taufbriefe, Taufhelgeli) have been an attribute of the baptismal ritual in the German lands since as early as 13th century. Earliest surviving notices date back to the late 16th century. Short notices with quotations from the Bible or folk blessings often accompanied baptismal gifts (often a little purse with money) from the sponsors, and served as a reminder to the parents of the baptized. The baptismal notices of the Schuetz family are decorated with block-printed ornaments executed black or, in this case, blue ink and hand-colored with various degrees of precision.

The Schuetz children probably received these notices from members of their home protestant church in Canton Berne, Switzerland. As is evident from baptismal certificates, the children were baptized very young, so if filled on a day of a baptismal, the notices would be kept in the family for children to learn about the importance of baptismal. If filled out on a day of confirmation, the notices would be the keepsakes and a reminder of an important ritual.

A son of soap manufacturers Hans (John) Schuetz and Magdalena Luthi, Gottlieb Schuetz was born in 1838 in Canton Berne, Switzerland. He married Anna Parli who also came from Canton Berne, Switzerland in 1863 and immigrated to Humboldt, Nebraska in 1870. Their daughter Maria (Mary) Schuetz, born in 1867 in Switzerland started the Dean family line marrying German-born Dirk Sutorius in 1889. Sutorius' daughter Emma, born in 1890 married a recent emigrant from Germany (1908) Edo F. Harms in 1914. All three generations lived in Humboldt, Nebraska in close proximity with various relatives (Emma Sutorius's uncle John Schuetz lived right next door to her family according to the 1930 census). 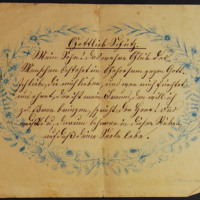