This document comes from the family of Bill Dean, Margaret Dean's husband, who are the second great-grandchildren of Gottlieb and Anna Schuetz. It is a baptismal notice from Parli family to Schuetz's second daughter Elize sponsors wrote as keepsake of the baptismal day. Baptismal notices (Tauzettel, Taufbriefe, Taufhelgeli) have been an attribute of the baptismal ritual in the German lands since as early as 13th century. Earliest surviving notices date back to the late 16th century. Short notices with quotations from the Bible or folk blessings often accompanied baptismal gifts (often a little purse with money) from the sponsors, and served as a reminder to the parents of the baptized. The baptismal notices of the Schuetz family are decorated with block-printed ornaments executed black or blue ink and hand-colored with various degrees of precision.

The Gottlieb and Anna Schuetz received this notice on the day of their second child Elize's baptismal from Anna's family, the Parlis.

Elize Schuetz was the second child in the family born on April 17, 1865. She died in the vicinity of Humboldt, Nebraska on September 17, 1877, the year she turned twelve. 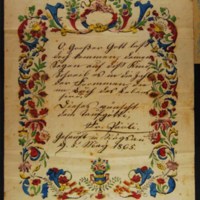