Baptismal cards were probably used in combination or in lieu of the traditional baptismal notices (Taufzettel) from the sponsors. The godparents would buy a card, write in their name and date and present it to the family of the child on the day of the baptismal. The family kept the cards as a keepsake and valued them so much that they brought them with other documents to America. This is the inside of the baptismal card featuring a heading "In Memory," a proper verse containing wishes for the baptized child, the name of the child, and the signature the sponsors and date. The card comes from the Dean family collection, the second great-grandchildren of Gottlieb Schuetz and given in the mamory of Maria Schuetz baptism. 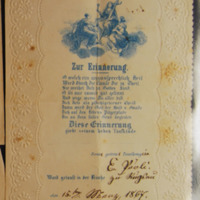