Gottlieb Schuetz and Anna Parli were the second maternal great-grandparents of Bill Dean and his family who shared the documents at the History Harvest.

The Swiss Parli relatives probably sent this check to the Schuetz family in 1873, three years after the Schuetzes moved to the United States to support them in starting their life in Humboldt Nebraska. The check is for $50.00, which in 2010 money is about $900, a sum good enough to support a family of seven for a while. Jacob, the fifth child in the family was born in July of 1870, the year they moved.

A son of soap manufacturers Hans (John) Schuetz and Magdalena Luthi, Gottlieb was born in 1838 in Canton Berne, Switzerland. He married Anna Parli who also came from Canton Berne, Switzerland in 1863 and immigrated to Humboldt, Nebraska in 1870. Their daughter Maria (Mary) Schuetz, born in 1867 in Switzerland started the Dean family line marrying German-born Dirk Sutorius in 1889. Their daughter Emma, born in 1890 married a recent emigrant from Germany (1908) Edo F. Harms in 1914. All three generations lived in Humboldt in close proximity with various relatives (Emma Sutorius's uncle John Schuetz lived right next door to her family according to the 1930 census). 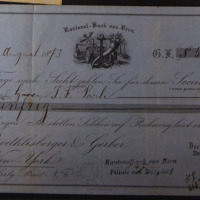