The Family of Bill Dean collection includes many death notices cut out of mostly German-language newspapers. These four notices tell of Carl Christian Schuetz's death almost two years after he sustained injury in a tornado. A barn collapsed on him, and although he was still alive after his family took him out he was paralyzed and crippled. The whole community sympathized with the family suffering and the funeral was very large, showing that this was an unusual happening in the Humboldt community.

Born in 1881 Carl Christian Schuetz (called "Little Christ" in one of the articles, probably because of his long suffering) was the eighth child in the family of Swiss immigrants Gottlieb and Anna Schuetz. He died at the age of fourteen on April 11, 1895. His elder sister Maria was a maternal great-grandmother of the Bill Dean family. 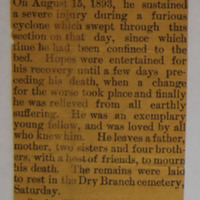 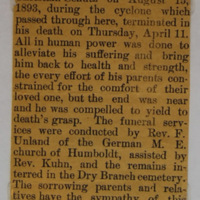 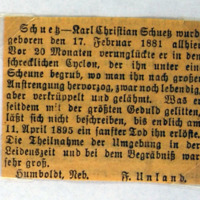 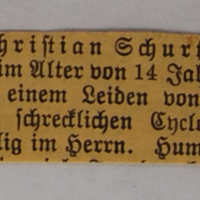