The Family of Bill Dean collection includes many death notices cut out of mostly German-language newspapers. This obituary tells of Anna Schuetz's death in 1906, at the age of 66.

Born in 1840 in Ruegsau, Switzerland, Anna Parli married Gottlieb Schuetz, who lived in the same Burgorf District in Canton Berne, Switzerland in 1863. A son of soap manufacturers Hans (John) Schuetz and Magdalena Luthi, Gottlieb was born in 1838 in Canton Berne, Switzerland. Having lived in various places in the Burgdorf district between 1863 and 1868, they finally immigrated to Humboldt, Nebraska in 1870. Anna's fifth child was born in July of the same year. The obituary reiterates the tragic story of Anna's son, Carl Christian, who became paralyzed and crippled after a barn collapsed on him during a tornado, and died almost two years after the incident. 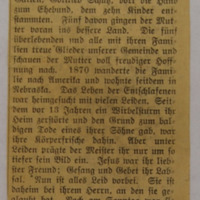