The Family of Bill Dean collection includes many death notices cut out of mostly German-language newspapers. This obituary tells of Jacob Gutknecht's death in or around 1886. Born in 1825 in Baden, Jakob came to America at the age of thirty with his family. His wife soon died leaving him with five children. In 1871 he married Susanna Koenig with whom he had seven more children one of whom died. As with other obituaries, the writer devotes much space to Jakob's participation in the church activities and the praise of his faith.

Jakob Gutknecht might have been a family or church friend of the Schuetz-Sutorius-Harmses, maternal ancestors of Bill Dean. The family began with Gottlieb Schuetz and Anna Parli who came from Canton Berne, Switzerland to Humboldt, Nebraska in 1870. A son of soap manufacturers Hans (John) Schuetz and Magdalena Luthi, Gottlieb was born in 1838 in Canton Berne, Switzerland. He married Anna Parli, also from Canton Berne, in 1863 and immigrated to Humboldt, Nebraska in 1870. Their daughter Maria (Mary) Schuetz, born in 1867 in Switzerland started the Dean family line marrying German-born Dirk Sutorius in 1889. Sutorius' daughter Emma, born in 1890 married a recent emigrant from Germany (1908) Edo F. Harms in 1914. All three generations lived in Humboldt, Nebraska in close proximity with various relatives (Emma Sutorius's uncle John Schuetz lived right next door to her family according to the 1930 census). 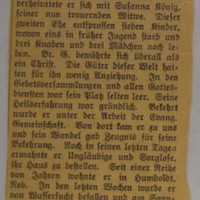