Peh Wah Mu shared her traditional Karen clothing, scarves, and the Karen flag. Peh Wah Mu is originally from Burma, and spent twenty-five years in a Thailand refugee camp before moving to Lincoln, NE in 2009. In this video, Peh Wah Mu explains the meaning inherent in her clothing, as well as the symbolism and meaning of the Karen flag. The materials were hand-woven by groups of women, who sell their crafts to others. Karen residents of Lincoln often wear this traditional clothing, though many wear common American clothing as well. 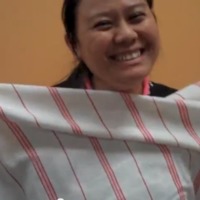