These two admission tickets a Chautauqua event, organized by a recently established (1898) Texas-Colorado Chautauqua Association belonged to F.J. Nelson of Axtell, Nebraska. Chautauqua is an institute of short two-three week schools for popular adult Christian education a Sunday School organizer John Heyl Vincent and businessman Lewis Miller started in 1874 on the shores of lake Chautauqua in New York. As its popularity grew, other educators and benefactors established independent or daughter Chautauquas in other parts of the country, usually in the picturesque scenic places on the outskirts of a larger town within an easy trip from the railroad station. Lectures, music, and other arts always occupied a central role in a Chautauqua experience attracting a large number of patrons from rural areas with few other opportunities to access education and quality entertainment. This, no doubt, was a major event for Betty Wilberger's grandfather F. J. Nelson who came to the August 3 1899 event in Denver from Axtell, Nebraska. A link between Texas and Colorado in 1899, Colorado and Southern Railway became a part of the Chicago, Burlington and Quincy railroad in 1908. 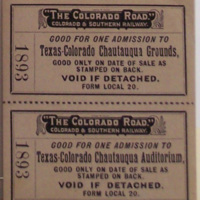 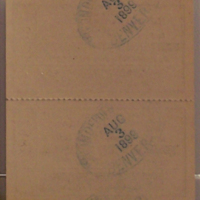