Issued to a drover overseeing transportation of cattle from the Omaha market to Axtell, this ticket is one of the rare documents of the turn of the 20th century railroad operations. Unlike a passenger ticket, the drover's ticket featured a list of physical descriptions to be marked, so that no random person riding in the cattle car could appropriate it. Thus we learn that F. J. Nelson (Ms Wilberger's grandfather) was of medium size and height with light hair and a moustache. Unlike modern descriptions that usually feature eye-color, this one provides for the description of the facial hair, a more prominent characteristic. It also tells historians that all cattle drovers were men.

In 1903 Omaha had already established its reputation of one of the major livestock exchange and stockyard site west of Chicago, the location largest stockyards in the world at the time. 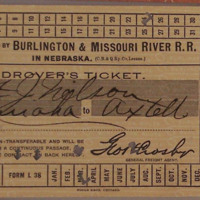 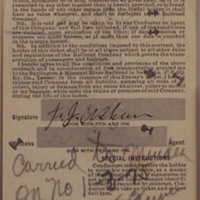