Book titled "A Flowering: A Festival: Writing and Storytelling Festival for Older Nebraskans. The story, "Grandpa Johnny" (p. 54-59), was written by Ronald M. Rockenbach in the 1970s and published on May 23, 1981 within this collection of works sponsored by the University of Nebraska-Lincoln, Division of Continuing Studies in Cooperation with the Nebraska Commission on Aging. About the story, Rockenbach said:

"This is a story of rural life on my grandfather's farm. I first wrote this for an assignment for Paul Olson's 'Plains Literature' class in the late 1970s. A couple of years later I submitted this story for a workshop for older Nebraskans, either written or about them. The original assignment was to pick your most favorite grandparent and tell about them. It was a labor of love as his far was sanctuary from an absent, workaholic father and a physically, mentally, suesally [illegible, possibly sexually] and emotionally abusive mother that never wanted to be a suburban housewife in Papillion, for the next 33 years.

It was a stout story to me and I asked my Shakespeare instructor, Robert Knoll to read it. I knew the descriptions exercised too many run-on sentences and alliteration that became more a test of tongue-twisters. Prof. Knoll said I had written a reminiscence, not a short story because my story lacked conflict. I simply did not include the abuse by my parents or the destruction of rural community I saw every waking day in suburban Papillion, or East Lincoln toward Eagle-Watton-Waverly. My style was influenced by Willa Cather's "My Antonia" about the richness of the prairie and the alternate time paragraphs by Faulkner's stream of conscienceness (sic). Conflict and turmoil has a sequal witing from family and unfulfilled liberal issues awareness that never landed me work or a life." 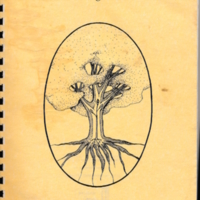 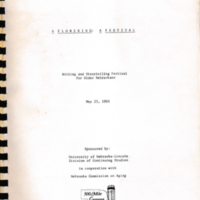 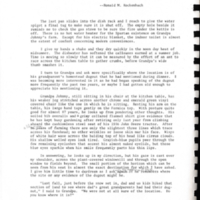 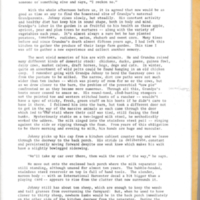 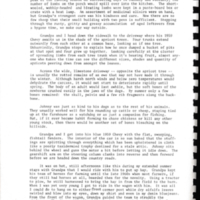 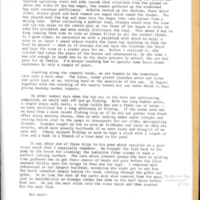 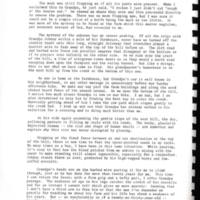 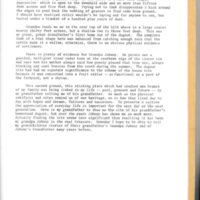