Handmade cameo brooch from the 19th Century (c. 1870). The cameo is carved from shell and is bordered by 24 carat gold. The original fastener pin on the back is still intact and functioning. The carved scene depicts a woman walking near a town or city.

The cameo belongs to April White (née Headley) of Kearney, Nebraska. She received it from her mother, Terri Headley (née Johnson) of Omaha, Nebraska, who originally received it from a member of her family. Originally, the cameo was a wedding gift to Mary Cronin (née Jensen) of O'Neill, Nebraska in the 1870s. Mary is Terri's ancestor. 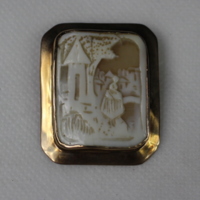