This is a a record of parole of the 15th Iowa Volunteer Infantry Regiment soldier, Samuel L. Roberts, from the Confederate imprisonment. Captured in the second battle of Corinth, Mississippi "on or about 3rd day of October" 1862, the military authorities exchanged Roberts promptly on October 15th of the same year, after having him sign a pledge "not to take arms again" in any capacity. Roberts did not keep the pledge, however, as in 1864 he was writing back home from "[n]ear Chattahoochee rive Ga," a sight of the Battle of Kennesaw Mountain. The exchange took place according to a recently established Dix-Hill Cartel (July 22, 1862) in Vicksburg, Mississippi, that along with A.M. Aiken's Landing, Virginia was one of the two locations where prisoner-of-war and civilian population exchanges between the two armies could occur. The document now belongs to Roberts' granddaughters Grace Emmett and Mary Ann Hessenflow.

Vicksburg, Miss., Oct 15th 1862.
This is to certify, That in accordance with a Cartel, in regard to an exchange
of Prisoners, entered into between the Governments of the United States of Ame-
rica and the Confederate States of America, on the 22nd day of July, 1862,
S. L. Roberts Private Company
G. 15th Regt Iowa, Infantry
who was captured on or about 3rd day of October at
Corinth Missi, and has since been held as a Prisoner of War by
the Military authorities of the said Confederate States, is hereby Paroled with full
leave to return to his country on the following conditions, viz: that he will not take
up arms again, nor serve as Military Police or Constabulary force in any Fort,
Garrison or Field work held by either of the said parties, nor as Guard of Prison-
ers, Depots or Stores, nor discharge any duty usually performed by soldiers until
exchanged under the provisions of the Cartel referred to. The aforesaid
S. L. Roberts signifying his full and free consent to said
conditions by his signature hereto, thereby solemnly pledging his word and honor
to a due observance of same. 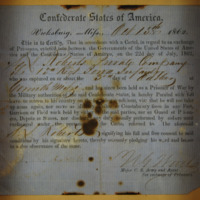 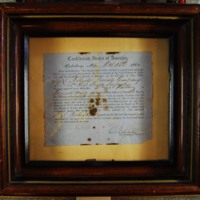