Obtained from a state adjutant-general's office, proof of service record was a major document that gave a soldier a right to claim pension. If preserved, the document gives information about the soldiers name, age, place of birth, and his history in the army.

Born in Ohio, but living in Indianola, Iowa in 1861, Roberts was only 18 when he enlisted. The 15th Iowa Volunteer Infantry Regiment where he served was mustered in 1862, and was engaged in the Battle of Shiloh, and the Second Battle of Corinth, where the Confederate army captured Roberts and later exchanged him in Vicksburg, Mississippi. Despite the pledge upon parole "not to take arms again" he probably never quit the service and in 1864 participated in the Atlanta Campaign with the 15th Iowa. Samuel L. Robert's proof of service helps us find out he was wounded twice, first in the Second Battle of Corinth, in October 1862, and than in the Battle of Atlanta, on July 28, 1864.

In Testimony Whereof, witness my hand and seal, at
Des Moines, this 27th day of Dec., 1912
[signed]
acting Adjutant General 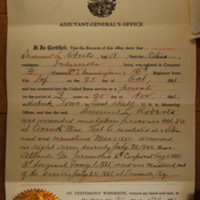