Printed on May 30, 1865 in Washington D. C. General Sherman gave out Special Field Orders, No 76 to all the men in his army as a commemoration of their wartime record. The document bears the badges of the Union Army Corps XII, XIV, XV, XVII, and XX. Sherman recalled all the great battles of the war, the courage of his army and urged the men not to yield to the temptation to "seek new adventures abroad … for it will lead only to death and disappointments."

Samuel L. Roberts from 15th Iowa Infantry kept this address, as a memory of the five years in the army. Born in Ohio, but living in Indianola, Iowa in 1861, Roberts was only 18 when he enlisted. The 15th Iowa Volunteer Infantry Regiment where he served was mustered in 1862, and was engaged in the Battle of Shiloh, and the Second Battle of Corinth, where the Confederate army captured Roberts and later exchanged him in Vicksburg, Mississippi. Despite the pledge upon parole "not to take arms again" he probably never quit the service and in 1864 participated in the Atlanta Campaign with the 15th Iowa. The document now belongs to Roberts' granddaughters Grace Emmett and Mary Ann Hessenflow. 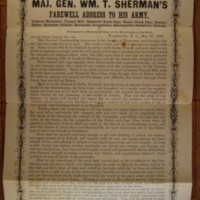