This poster is one in the eight great Union Armies poster/map series published by the National Tribune Co. Washington, D.C. in 1904. The Army of the Cumberland poster includes the basic dates and facts (its constitution, commanders, strength, principal battles, and the field of operations), the map of the field of operations, and the portraits of the army commanders. The signature on the poster reads, "This is to Certify, Jos. Littlefield served in the Army of the Cumberland having been a member of the Company C 102nd Regiment Illinois Infantry 20th Army Corps. (Signed) The National Tribune."

Founded in 1877 in Washington, D.C. by a pension claims agent George E. Lemon the National Tribune was one of the most influential veterans' publications in the United States, promoting the interests of the Grand Army of the Republic (GAR). One of the more populous Civil War veterans' organizations, the GAR was founded in 1866 in Decatur Illinois and dissolved in 1956 when the last GAR member died. The National Tribune functioned as a GAR newsletter where veterans could connect and share memories. The series of the eight great Union Armies posters started in 1904, and apparently the newspaper sent it by request to soldiers, signed with their name and regiment.

Born in Peoria County, Illinois in 1840 the recipient of this poster Joseph Littlefield served almost three years in the Civil War as a private in company C of 102nd Illinois volunteer regiment. After the war he returned to Illinois and married Hellen Crandle. In 1879 Joseph Littlefield and his family that included his mother Joanna, who was 71 at the time, came to Nebraska Clear Creek area, Sherman County to homestead. Hellen died in 1881 and six years later Joseph, now 47, married 24 year-old Lotta (Charlotte) Roberts, and had 7 more children with her, of whom only 5 survived. Littlefield moved to Aurora, Nebraska in 1904 and died there in 1911.

After the war Littlefield was very active in the local Grand Army of the Republic (GAR) chapters, always travelling to the veterans' meetings wherever he was.

The poster comes from the collection of Terri and Dave Mabon. Dave Mabon is Joseph Littlefield's great-grandson. 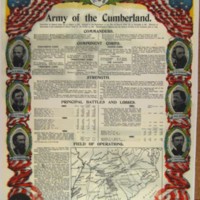