After the war Littlefield was very active in the local Grand Army of the Republic (GAR) chapters, always travelling to the veterans' meetings wherever he was.

The pension certificates are valuable documents for family and economic history, as they provide the names, dates, and vital data for the people in the family, as well as information on the amount of pensions widows and underage children received in the stated period, in this case 1911. This certificate comes from the collection of Terri and Dave Mabon. Dave Mabon is Joseph Littlefield's great-grandson. 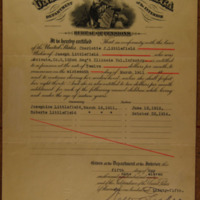