This is a baptismal certificate for Emma Elise Sutorius, Bill Dean's maternal grandmother, born in 1889 in Humboldt, Nebraska, the first child of Dirk and Maria Sutorius. They probably gave their daughter second name Elise in memory of Maria's elder sister, who died at the age of twelve.

A granddaughter of Gottlieb and Anna Schuetz, Emma married a recent emigrant from Germany (1908) Edo F. Harms in 1914. All three generations lived in Humboldt, Nebraska in close proximity with various relatives (Emma Sutorius's uncle John Schuetz lived right next door to her family according to the 1930 census). 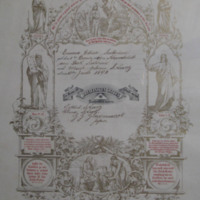