This is a memorial certificate presented to Emma Sutorius, Bill Dean's maternal grandmother, on the day she passed her Catechism exam in 1904. Born in 1889, Emma passed her exam at the age 14.

A granddaughter of Swiss emigrants Gottlieb and Anna Schuetz, Emma was the first child of Dirk and Maria Sutorius. She married a recent emigrant from Germany (1908) Edo F. Harms in 1914. All three generations lived in Humboldt, Nebraska in close proximity with various relatives (Emma Sutorius's uncle John Schuetz lived right next door to her family according to the 1930 census).

The Schuetz-Sutourius family most probably attended the German Methodist Church, established in Humboldt in 1879. The town itself was home to a vibrant immigrant community uniting people from Germany, Switzerland, Bohemia, and later Czechoslovakia, England, and various other places in the United States and beyond. 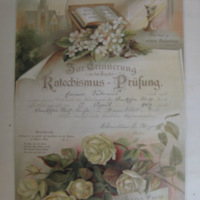