This is the front and back of a dollar, which is likely part of a short snorter, from the Eugene Sengstake collections. This collection is donated by Eugene Wagner Sengstake Jr. A short snorter is a banknote which was signed by various persons travelling together or meeting up at different events and records who was met. The tradition was started by bush pilots in Alaska in the 1920's and subsequently spread through the growth of military and commercial aviation. Often times soldiers would add a new bill to their short snorter each time he visited a new country. Dated March 16 1944, this one-dollar Hawaii US Dollar seems to contain nine signatures. Among the signed names, Sengstake's name appeared in the third column from the right.

Eugene Wagner Sengstake Sr. of Lincoln, Nebraska, served in the 110th Medical Regiment and later as a B-24 pilot. Sengstake served the U.S. Army Air Forces from 1941-1944, and he attained the rank of 2nd Lieutenant. His service was in the South Pacific, including New Guinea. He was killed in action June 9, 1944 between Palau and Wakde Islands. 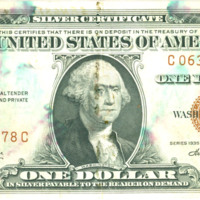 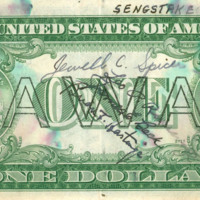