This is Eugene Stengstake Sr's. hat worn in the military. It is a peaked cap made by Brooks in California. The hat is made of soft, green corduroy cloth, with a brown, leather visor. 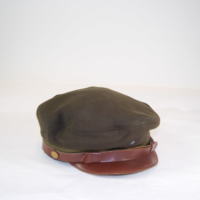