In this letter, J. A. Ulio, an army officer, informs Mrs. Sengstake that her husband is missing, and that she will be informed if anything changes. She is also told that she is entitled to his pay and allowances. 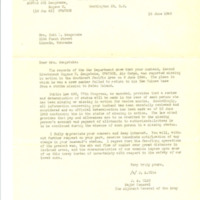