"John A. Logan in 1859" Chromolithograph

"John A. Logan in 1859" Chromolithograph

This lithograph comes from Grace Emmett and Mary Ann Hessenflow's collection. Originally printed by the Puck magazine in 1884 and framed in Roberts's family in 1938, it alludes to the pre-Civil war debates on whether the North should continue to acknowledge the slavery in the South and not prevent its spread into the Western territories or support the rights of the free labor.

John A. Logan, portrayed in center of the lithograph holding a paper that says "No Interference with Slave-Hunters!" was a Democratic representative from Illinois in 1859, defending Douglas's position on slavery against the burgeoning Republicans Lincoln, Seward, and Sumner portrayed on the left of the lithograph. In a speech that gave him his nickname, Logan claimed that arresting fugitive slaves was the "dirty work" for Democrats to do in the "Western states." Behind Logan are the African American people persecuted by the slave-hunters, portrayed with exaggerated features, dressed as bandits. Serving as a Union Army general in the Civil War all but obliterated Logan's anti-Republican record. Yet when Logan became the Republican vice-presidential candidate in the 1884 election, the pro-Cleveland Puck printed this lithograph to remind its audience of the Logan's past. Logan and his co-runner James G. Blaine lost the election.

The lithograph comes from a family of a Civil War veteran and could have had two uses. For one, the original owner Samuel L. Roberts probably served under Logan, could have shared Logan's views both before and after the war, and kept this lithograph for the sake of having Logan's likeness. Another possibility is that the lithograph symbolized the beginning of the war in which Roberts fought and the symbol of his fighting. Since the lithograph was framed in 1938, it is also possible that the owners saw it as a representation of the horrors of slavery and a symbol of their ancestor's service to the country in the Civil War.

The lithograph's framing obscured its title and purpose and it would have been impossible to interpret its meaning without addressing the Library of Congress collection, where it can be viewed in greater detail at http://www.loc.gov/pictures/item/2012645248/. 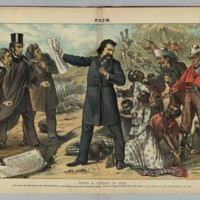 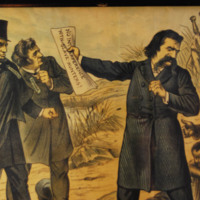 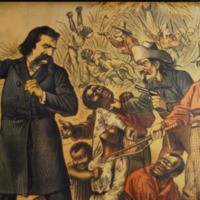 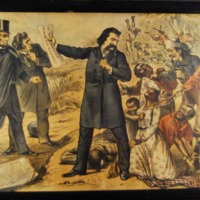