Wead: Negro Feels Girl's Life Worth More than a Loaf of Bread

Wead: Negro Feels Girl's Life Worth More than a Loaf of Bread

This newspaper clipping shows the layout of the neighborhood where Patrolman James Loder shot and killed fourteen year old Vivian Strong. The shooting took place on June 24, 1969 in North Omaha. The officers were responding a reported break in at a housing project when a group of young people scattered and ran. Strong was shot at the base of the skull as she fled. The group of young people had been listening to records in the alley and had come to see why the police were in the area. The officer did not shout any warnings and only one shot was fired. The slaying sparked public outcry, as well as vandalism and looting in the area. 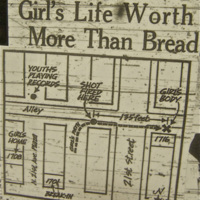