A friendly letter to Eugene Sengstake Sr. from Blanche Bullock describing her excitement for his return to the United States. 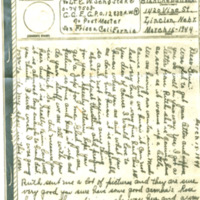