This is Eugene Sengstake's name tag from World War II. 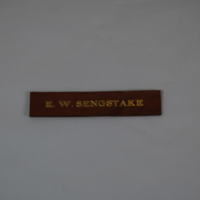