Eugene Sengstake Sr.'s pilot wings that he wore during World War II when he was a B-24 pilot. 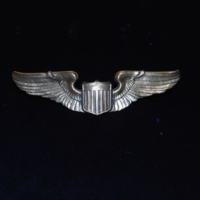