Letter from Robert W. Jones to the Office of Dependency Benefits, December 22, 1944

Letter from Robert W. Jones to the Office of Dependency Benefits, December 22, 1944

A request from Robert W. Jones, Personal Affairs Officer, to the Office of Dependency Benefits. This is a request to investigate the missing beneficiary checks from the months of November and December from the household of Ruth Sengstake.

Eugene Wagner Sengstake of Lincoln, Nebraska, served in the 100th Medical Regiment and later as a B-24 pilot. Sengstake served in the U.S. Army Air Forces from 1941-1944, and he attained the rank of 2nd Lieutenant. His services was in the South Pacific, including New Guinea. He was killed in action June 9, 1944 between Palau and Wake Islands. 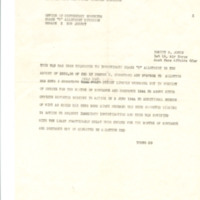