This letter from Glen E. Cole, commanding officer of the 409th bombardment squadron, described the nature of Eugene Sengstake Sr.'s disappearance, their efforts to locate him, and the location of Sengstake's effects. 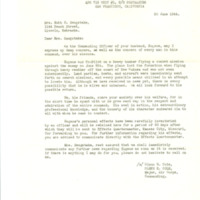