These "heads of Native American war clubs" were found near Sheridan Gates by Rev. E.C. Newland, Prof. E.P. Wilson and Mr. A.E. Sheldon (Secretary of the Nebraska State Historical Society) on trips to locate points of historic interest in anticipation of erecting monuments 1936.

Along with club heads there is also some stone grinders. Archaic peoples lived in the White River Valley for hundred of years, as evidence shows with historic sites found across the region. The Apaches moved into the Pine Ridge Forest area around 1500 and became known as the Kiowas Apaches. They lived in northwest Nebraska until around 1803, when they were forced out by the Brule Sioux. Sioux and Crow skirmishes followed in the area, with the most famous being the Crow Butte story.
The area where these stone artifacts were found is near the Beaver Wall area, a well known possible spot of Crazy Horses burial. This area was often a favorite spot of Indians. The Fort Pierre-Fort Laramie Trail ran through this area and was a big fur trading trail. Later on Camp Sheridan and the Spotted Tail Agency was formed near Sheridan Gates. 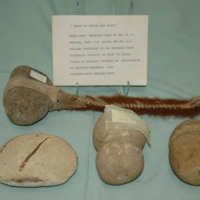