These are Shadow boxes put together with photos, patches, medals, and pins from the time Wyman Nemecek served in the United States Army Air Force (USAAF) during World War Two. Wyman was a tail gunner and flew in forty-two missions in the South Pacific, stationed in Guadalcanal. Wyman is now the only survivor of his flight crew.

The top shadow box is pictures of Wyman Nemecek (top left), his flight crew (top right and bottom), and one of he B24 bombers that his crew flew (middle).

Wyman Nemecek is originally from Noble, OK and was born Dec. 6th, 1923. After the war, Wyman attended Oklahoma A&M, taught GI School and managed lumber yards. He came to Nebraska in 1950 and lived in the eastern part of the state. He moved to Chadron in 2013 to be near his son. Since then his wife, Helen, passed away. Wyman is proud to be the father of six, grandfather of fourteen, and great-grandfather of twenty-three. This item was contributed at the Chadron State College spring 2014 History Harvest. 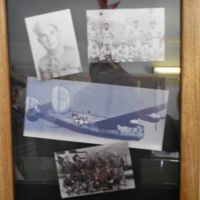 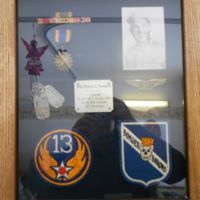