This Japanese Nambu firearm is an 8-MM caliber. Its serial number is 58668. Its note with the weapon states that it came from the South Pacific during World War Two. The crude workmanship on the firearm suggests that it was made hastily for a Japanese officer to go to war. The crude workmanship and the solid blot, instead of a grooved one, also suggests that it was made hastily for the war. The grooved hand guards, instead of smooth ones, point out that the weapon was made mid-war. The characteristics of the weapon point out that it is a Type 14 Nambu. The weapon is often mistaken for the German Lugar that was also used during World War two, however the two weapons have very few similarities. 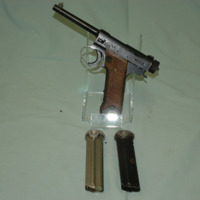 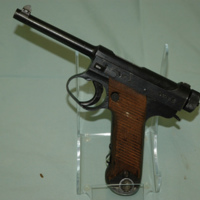