Colored postcard of the Grothan Elmwood Sanitarium established c. 1908 by Dr. Ole and Dr. Georgiana Grothan. In 1911, after the doctor couple divorced, the building was sold to the state of Nebraska and converted into living quarters for the physicians and nurses who worked at the adjacent Nebraska State Tuberculosis Hospital until 1971. The building still stands, housing the historic Frank House Museum and is part of UNK's campus and the National Registry for Historic Sites. The building was originally built in 1889 by George W. Frank of Kearney, Nebraska, Corning, Iowa, and New York state.

The postcard was sent to Lizzie Parr of Omaha, Nebraska. 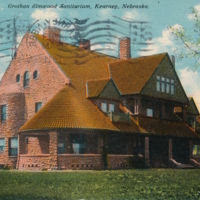 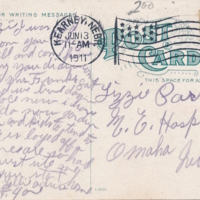